When I first arrived in Munich back in 2000, I recall that for all the culture of this great berg, I could not find a decent cheeseburger. Eventually I discovered an American chain-hotel, the Marriot®, which had one that was passable. They did, however carry NFL® football games years before Germans took much interest in the game. The beef patty was always exactly the same size and cookie-cutter shaped, exactly the same thickness and exactly the same amount overcooked. Always. Maybe it was revenge for American sausages that resemble Nürnburger Rostbratwurst® flavored with maple syrup, so I just bucked up and did my best to imagine how good a real American cheeseburger might taste.

For years I took a lot of grief about America’s lack of culinary culture. “Believe it or not”, I told my German friends, “We have more to eat in America than McDonald’s® and Kentucky Fried Chicken®.” Unfortunately, that was before the omnipresent Google®, I had little proof, so they had to take my word for it. I can now show them a picture of a porterhouse steak, cooked medium rare (anything beyond that would be sacrilegious), with a baked potato, to confirm my earlier thesis. Other examples abound.

I am happy to say that cheeseburgers have arrived in Munich. There are many restaurants which have cheeseburgers on the menu, and even restaurants whose whole menu is devoted to different types of burgers. It has turned around so much and improved that I now have nightmares about one day seeing a cheeseburger on the menu at the world famous Hofbräuhaus.® And in my most honest humble opinion, the burgers come pretty damned close to an American original. They do seem to have some kind of love affair with 1000 island dressing, however, as if a splat of it on a bun makes everything more American. And they are still way overcooked. My local butcher grinds my beef fresh for me when I so desire, therefore I can eat my homemade cheeseburgers the way God® in the ‘Bayerisches Himmel’® (Bavarian Sky) intended them to be eaten. RARE. 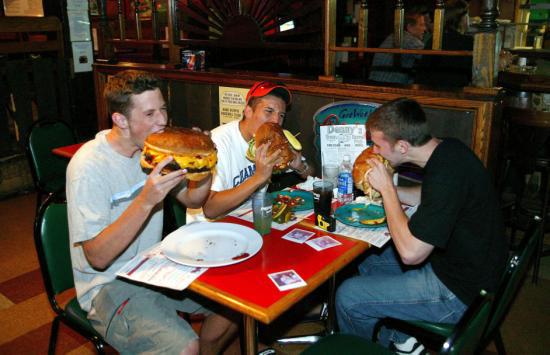 What about the way they are to be eaten? The proper instruction manuals seemed to have been lost in the mail. The Germans, who are not known for spontaneous decisions, must have decided somehow that the best way to eat a cheeseburger is with a knife and fork as if it were some kind of schnitzel. The incorrect information has already been widely been disseminated, and it is the societal norm now.

If there is one thing I refuse to do, it is eating a cheeseburger (and the fries) with anything other than my hands. Oh, and here is another.

12 thoughts on “Cheeseburgers in Paradise (NF)”